Robotic was motivated by the desire to develop an educational videogame that helps the learning of programming through the use of augmented reality, making it even more attractive due to the mixture of real and virtual objects.

Project promoted together with Telefónica.

This project is called RoboTIC, as it consists of the word robot (robo), which is related to information and communication technologies (ICT). 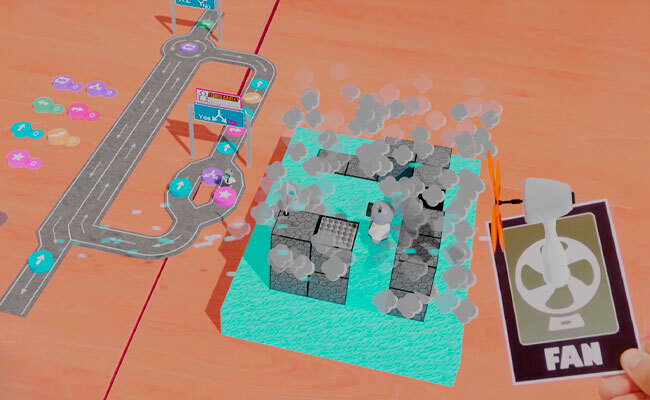 The general objective of RoboTIC is to facilitate and promote the learning of programming at initial educational levels through the use of metaphors and advanced interaction devices. To this end, a 3D game has been designed and developed in which the player progresses through a series of puzzle-like levels in which he/she acquires basic programming skills. This approach, based on gamification, ensures that the player has fun while learning. On the other hand, roads have been used as a metaphor for the real world to represent certain mechanisms in programming languages, such as expressions and loops.

Finally, interaction with RoboTIC is carried out using Augmented Reality techniques, based on superimposing virtual images on the real world and allowing interaction with the physical world. Specifically, the Microsoft Hololens device has been used.

In order to achieve this general objective, the following secondary objectives are proposed:

-To reduce the complexity of learning programming in its initial stages, through the use of metaphors and intuitive and visual interaction mechanisms.

-To facilitate the understanding of basic programming structures in an incremental way, minimising the learning curve. To this effect, different game levels are proposed, the difficulty of which increases progressively.

-To increase the motivation of students who have a first contact with programming, using an educational approach based on gamification.

-To promote the use of visual and interactive schemes in the learning of programming. In this way, the cognitive load necessary to assimilate programming concepts is reduced.

-To propose a design that is scalable so that new programming concepts, such as conditional statements, loops, function calls, etc., can be incorporated.

-Laying the foundations of an environment that allows collaborative programming so that several players can solve the same programming problem. Applications based on the use of (AR) can be used for teamwork.