Furious Koalas participates in the first 5G pilot project to be implemented in Castilla-La Mancha. Launched through RED.ES, part of the Ministry of Economic Affairs and Digital Transformation. In addition to being included in the call for proposals “Red 5G Pilot Projects”. Financed by the European Regional Development Fund.

It is a project promoted by a UTE formed by the companies TELECOM CLM, FURIOUS KOALAS (spin-off of the University of Castilla-La Mancha) and AMANTO SOLUCIONES.

The context of this use case is associated with situations where people in an emergency medical unit need real-time support from other medical specialists, who are physically located in a fixed base, such as a hospital.

This support is materialised through the use of Augmented Reality, the design of an audiovisual information communication system in real time and in open environments. With the adoption of a paradigm based on fog computing, all supported by 5G infrastructure.

In this way, the user of the augmented reality system will be able to see, perfectly aligned with their perception of the real world, virtual computer-generated images that will help them to carry out medical assistance tasks. These indications can be 3D objects, videos or texts.

As the end user, the staff of the General Hospital Nuestra Señora del Prado in Talavera de la Reina, will be able to evaluate the advantages of the system in real environments. In particular, it is proposed to improve the efficiency offered by mobile emergency units in terms of reducing specialised patient care, when necessary, as the system would offer a new real-time interaction mechanism that would eliminate spatial barriers when attending to emergency situations.

This use case of healthcare teleassistance with Augmented Reality consists of the following steps:

The mobile emergency team wears augmented reality glasses that are connected to the 5G network and transmit, in real time, a video and audio stream. The specialised doctor receives this stream and provides support remotely to the emergency staff, not only in the form of verbal communication, but also by displaying virtual information about the real world that the medical staff is perceiving. 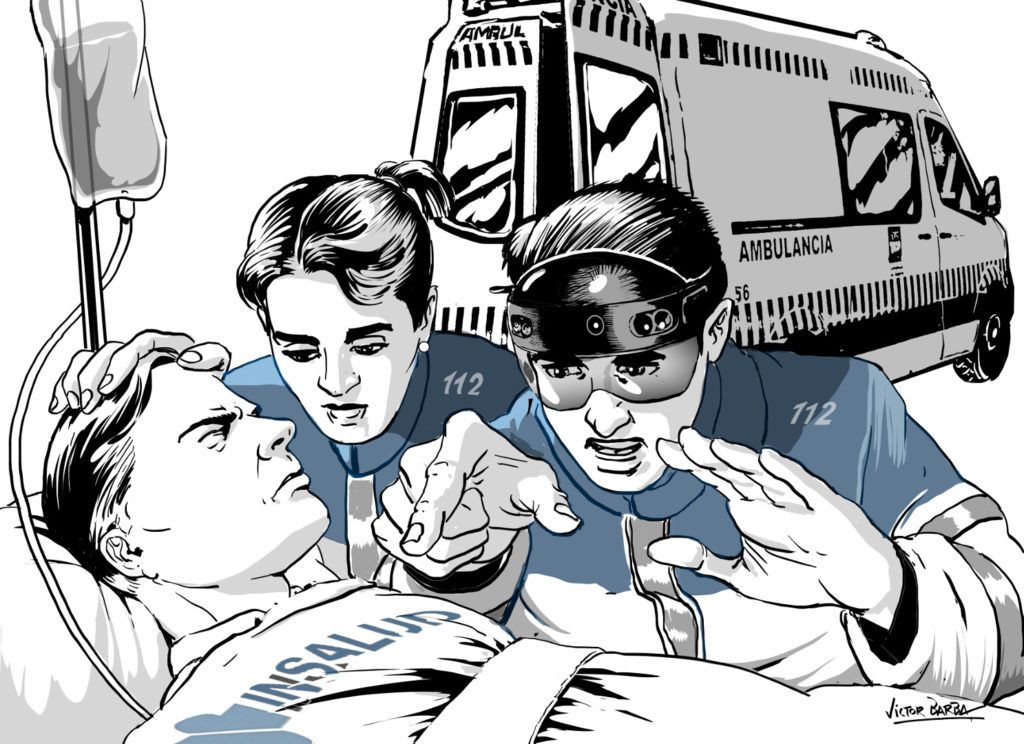 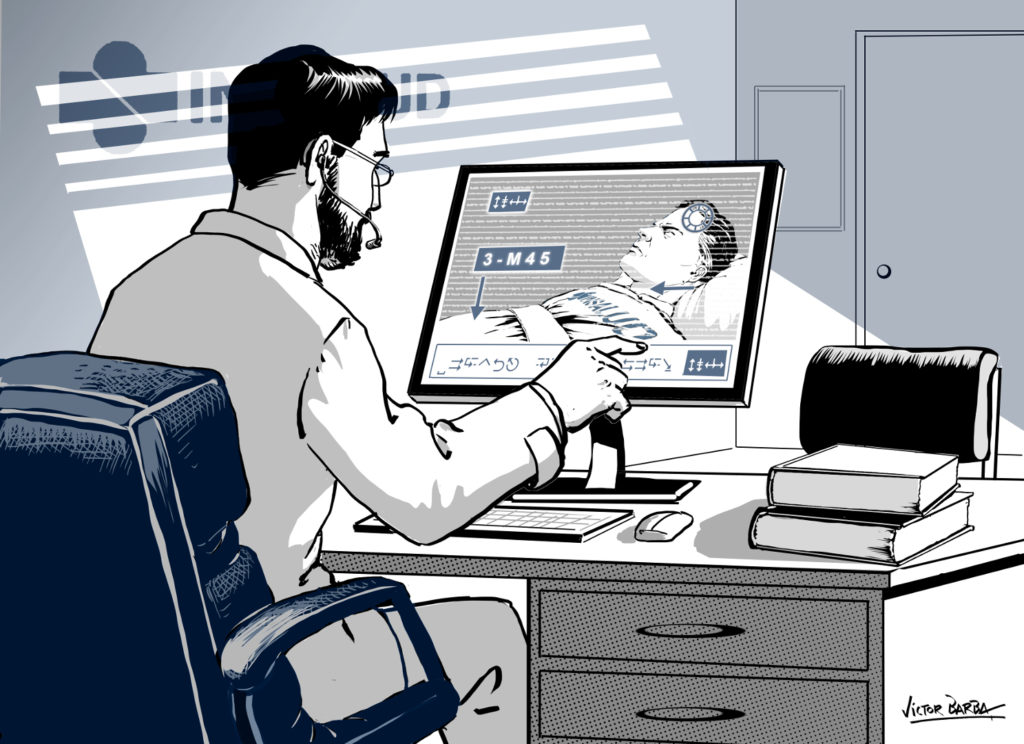 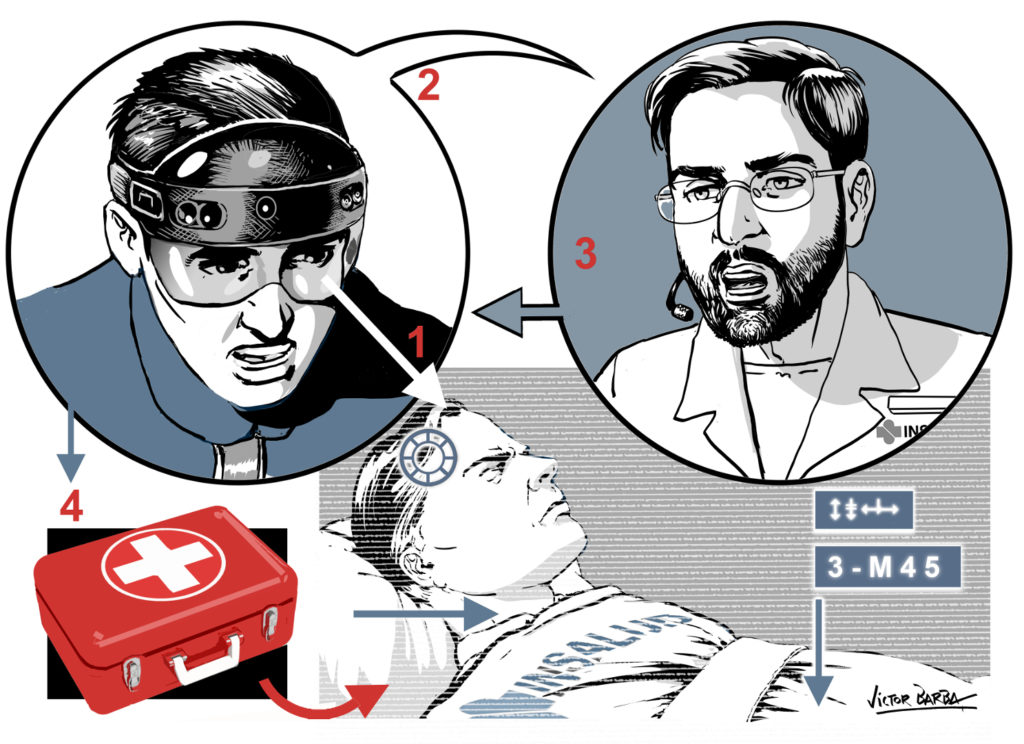 On the other hand, a scenario that can be extrapolated to the future, and as an extension of the one mentioned above, is shown in the following image. We refer to situations in which attending to the affected person could be significantly delayed due to, for example, the difficulty in accessing a physical location or the physical distance between the affected person and the nearest point from which a mobile emergency team could depart. 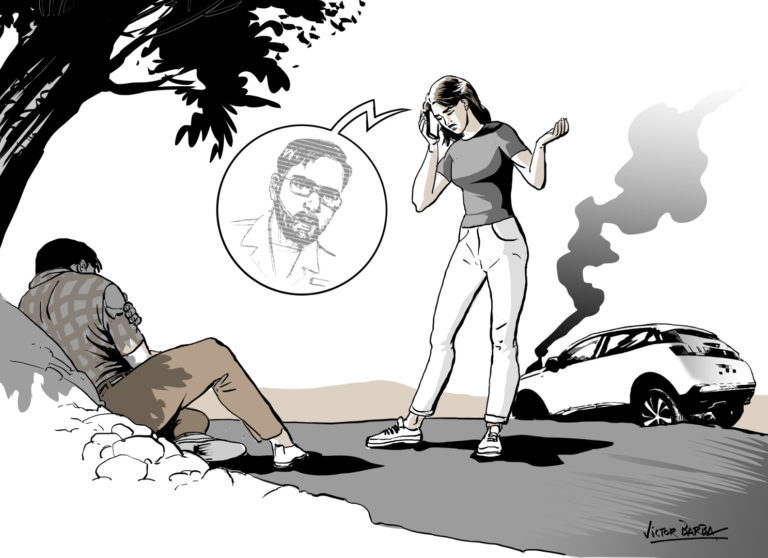 The use of autonomous drones would be envisaged as entities capable of delivering a support device that could be used by a non-expert to assist a person affected by an accident. In this case, specialist medical personnel would be assisted, again through augmented reality. The 5G infrastructure would serve both to guide the drone and to support the system proposed in the use case presented here.

TELEFÓNICA: Spanish multinational company, leader in mobile communications in different countries in markets as diverse as Europe and Latin America. It is participating in this pilot project by providing its 5G network infrastructure and the new frequency bands for this technology.

5G Pilot Project C012/19-SP co-financed through the 5G Technology Pilot Projects Programme launched by RED.ES (an essential entity in the execution and deployment of the plans foreseen for the digitalisation of Spain) Pluriregional Operational Programme of Spain, through the European Regional Development Fund (ERDF) “A way of doing Europe” with the collaboration of the Ministry of Economy, Economic Affairs and Digital Transformation.